Breviloquence was Grandfather’s hallmark in life.  Born in 1888, Edwin A. Noorlun was usually a man of few and gently spoken words.  That mindset of Grandfather’s was cemented into reality for me when my father, Russell, shared the following scene.  Early in the 1930’s, as a young teenager in their farm home near Fosston, Minnesota, Russ witnessed his mother, Marie, the “live-wire” of the marriage, attempt to engage Grandpa Ed in an argument.  There at the family’s dinner table, Grandfather Edwin would be quietly ensconced behind his newspaper reading, while his rotund wife, Marie, would be in a tirade about something that had transpired that riled her matronly shackles.  All the while he was behind that newspaper, Grandpa Ed knew full well of Grandma Marie’s intentions to get him embroiled as a participant in her ravings.  So, as my dad would later relate to us kids, Grandpa Ed slowly lowered his newspaper and said to Grandma Marie (in Norwegian), “Ya sure, you’d just like me to argue, wouldn’t ya?!”  At that instant, up would go the newspaper in front of his face, and he’d return to his quietness while Grandma Marie exploded in an ever heightened fit of rage!!! 😉

There were the times, though, when grandfather’s quiescent jaws became lubricated whenever he and our father, Russell, came together for father and son fellowship.  You see, our dad was the only child (out of 8 siblings) of Edwin’s that followed his paternal parent’s vocational footsteps, as far as becoming a farmer like his daddy was.  Of course, without a doubt, I am of the conviction that Edwin loved ALL his children dearly, yet, there was an extra level of kindred spirit that I sensed, even when I was a little boy, that whenever Grandpa Ed came to visit our farm near Kiester, Minnesota, there was a special glow between Ed and Russ.    From the moment his yellow, 1949 Ford pulled into the farmyard driveway, I could pick up on the mutual camaraderie of father to son and farmer to farmer as those two Norwegian kinsman walked and talked together.

It was on one of those special farm visits by Grandfather Edwin, that I was a transfixed participant to one of his story-time moods.  While the sun settled to the horizon, and with Grandpa by his side chatting away, our dear farmer father finished milking our fifteen Holstein dairy cows.  After the milking machines had been sanitized and put away for the night, fresh straw bedding was fluffed up under our milking “ladies” and this mini-farmer watched Dad snap off the lights in the barn as the three of us made our way up to the house for supper while the black silk of evening wrapped around our agricultural world.  With a Mange Takk (many thanks) to mother for her fine victuals, pipe smoke and/or cigarettes were lit up as a type of menfolk dessert after the meal.  The blue, curling ascension of pipe smoke rose in dream-like mists towards the ceiling light of our farm kitchen.  The very ambiance of that smoke embellished the story telling of our father and grandfather as they visited their respective remembrances of life in northern Minnesota in the old days.

Father and myself listened while Granddad began to share of when he was a young buck.  He had ridden his horse into town to a meeting, with other farmers, at the local Grange Hall.  By the time the meeting had adjourned, the sun was beginning its last descent into the edge of the world, casting long, golden shadows as Ed rode along the gravel road towards home.  To his left, and down in the very high grass of those shallow road ditches, there was something loping alongside Ed as he, and his faithful steed, rode along.  It was a creature of some sort, yet it was only a silhouetted shadow between the setting sun and Ed.  Whatever it was, it was breathing hard.  If Ed slowed the horse down, the massive creature slowed down, if Ed chirruped the horse to a trot, the shadowy creature, partially hidden in the shadows of the tall grass increased in speed as well.  All the while, the frightening silhouette even rivaled the nostril-ed snorts of Ed’s horse.

Grandpa Edwin perceived that his horse was becoming very agitated as it sensed the danger that lurked down in those ever-darkening high grasses of the ditch.   Ed was not about to be attacked by whatever lurked below in that ditch so with heel digs to the horse’s sides and a loud, “Heeyaaah!!”, Ed urged his mount to a full gallop as they sped away from the area and the safety of their farm home a few miles or more down the way.   Now safely home on their farm and far away from whatever was in that ditch, Ed pulled the saddle from the sweaty horse, rubbed him down for the night, and headed into their house.   The family’s radio was playing in the Living Room (no television in those times) as Ed settled his nerves with some supper and a newspaper.  A news broadcast came on the air saying that a nearby circus had suffered the escape of one of their gorillas.  Was THAT the creature that Ed and his horse had encountered that evening????  Who knows???  I’ll tell ya one thing though, that story sure got the attention of THIS Norwegian Farmer’s Son!!! 😉 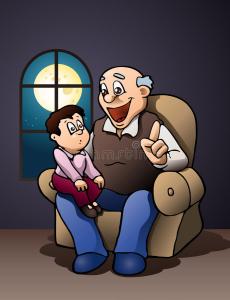