December 27th…“TELL US ABOUT THE 25TH WEDDING ANNIVERSARY OF YOUR PARENTS THERE ON YOUR FARM IN SOUTHERN MINNESOTA.”

Time-worn love letters from our handsome father, Russell, given in confidence to our cherished mother, Clarice, had been protected in the hallowed halls of Mom’s heart for over 70 years. Now, although brittle they were with time’s passage, those lines of love remained still tender in their power to move our mother’s emotions as she relayed their contents to us in her latter days. Back in our farm days, near Kiester, Minnesota, I can recall rummaging through the angled, pitched ceiling of an upstairs closet and finding these annals of admiration and courtship that eventually drew our parents to the church altar on June 21st of 1941. With a world around them in absolute turmoil, and on the verge of the global conflict of World War II, these letters, and their contents, had to have given our mother the assurance that love would conquer all. In my pre-teen archaeological find that day, I can still see that big bundle of love letters (still in their envelopes), now turning amber with the passage of years and being held together by a couple large rubber bands. Curiosity “killing the cat”, I snatched up my find and scampered down the creaking wooden stairs to find our mother fixing “Dinner” (which is what Midwest folk call the midday meal) for our farmer dad in our quaint kitchen.

“Say Mom, look what I found upstairs in the closet. What are these? They seem to have your name on the envelopes.” Mom’s eyes lit up as if I had just discovered the Hope Diamond, or something of similar value. “Ohhh my goodness!” she said, “Those are letters from your dad to me and they’re for my eyes only. Please put them back in the attic closet where you found them.” In acknowledging obedience, I honored mother and placed those romantic writings safely back where they rightfully belonged.

A quarter of a century of marriage had passed for those two Norwegian parents of ours, and the time is now June of 1966. Our good Lord had blessed our parents with four healthy children, 120 acres of bountiful Minnesota farmland, their first granddaughter, and a myriad of other joys that they were truly thankful for. Our eldest sister, Rosemary, along with our brother’s new wife, Lynn, had conceived and carried out this gala gathering and had called the clan from near and far to come celebrate the Silver Wedding Anniversary of Russell and Clarice Noorlun.

Thanks to our expansive farm acreage, we had plenty of parking for cars of all the many family and friends that gathered on that perfect June day to help our folks celebrate. Now, Norwegians are known for their teasing humor, and to have a platform for that fun stuff, there was created a mythical married couple in Norwegian joke books called “Ole & Lena”. Very likely, amongst the men in attendance at our farm that day, this joke may have been shared for a laugh, ……..Lars asks Ole, “Vat yew gonna dew tew celebrate yer Vedding Anniversay vit Lena? Mehbee go out und kill a shicken fer Supper?” Ole responds by saying, “Nay, nay, I don’t tink so…A shicken shooodn’t hafta soofer fer vat happened 25 yeers agoo!!” 😉

Tucked away, in my gene pool baggage compartment, were some odoriferous, oinkeristic ornery genes. For some reason, I surmise that my paternal grandmother, Marie Tollefson Noorlun may have dealt them to me as the cards of life were shuffled. From stories I heard, she could be a real stinker, herself. Those audacious attributes of mine chose to come to the surface there on our parent’s Silver Wedding Anniversary. Maybe it was too many adults everywhere in the house or yard, or, maybe there weren’t very many kids my age to play with that day; but whatever the extenuating circumstances, social conditions were just too much for this mini-hermit and I decided to vacate the house and farmyard vicinity in lieu of some reclusive enjoyment down at Brush Creek. Away I went to the creek. While getting knee deep in water and mud, I had fun chasing tadpoles and crawdads in the creek while getting thoroughly mud-plastered along the way.

From down in the creek bottom, I could hear car tires coming my way and rumbling against the gravel road above me on the bridge over Brush Creek. The car stopped and shut off it’s engine. It was my elder sister, Rosemary. Rosie leaned over the bridge railing and called to me in the creek waters below, “Heyyy Elliott!! Mom and Dad want all us kids to be at the house for a family photo together. Come home, clean up, change clothes and get ready for that photograph.” It could have been the bossy authoritarian tone of her voice, but my twelve year old ornery self replied, “Heck no!! I don’t wanna!!! I’m havin’ fun down here and there’s no way I’m gonna go to all that fuss for a silly photograph!” Ohhh, myyy, goodness!! My big sister went classically ballistic from her bellowing bridge barrages against me!! Whooodawgies was she mad as a wet hen when I flat refused!!! She stormed over to her car, fired up the engine and spun so much gravel with her tires that some of it flew over the bridge’s edge and down to the creek waters near me. Needless to say, I was worth less than two loogies in a spittoon in my sister’s eyes for quite some time after that.

Aside from my act of selfish immaturity, after that wonderful day of the Silver Anniversay celebration came to an end, our dear parents went on to experience another thirteen years and eight months together until Dad surrendered to pancreatic cancer and left us for Heaven’s Shores in February of 1980. Russell and Clarice didn’t have a perfect marriage, they experienced their highs and lows like every married couple. But, what they DID have has always stayed with me……they never gave up on each other!!! I see their long marriage summed up in a wise saying that goes like this, “A perfect marriage is just two IMperfect people that refuse to give up on each other”. Another muse on the subject of long marriage comes from the New Testament in Ephesians Chapter 5 and Verse 25…..”Husbands, love your wives, just as Christ loved the church and gave Himself up for her” I am so grateful for our parents says this Norwegian Farmer’s Son. 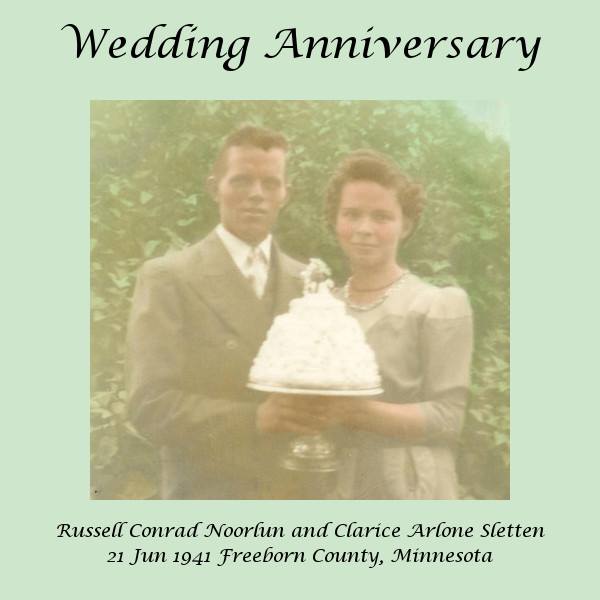