October 30th…“DID YOUR FATHER, RUSSELL, EVER TAKE PART IN ANY HALLOWEEN PRANKS WHEN HE WAS YOUNG?”

A glint of pixie dust sparkled from the corner of young Russell’s eye as he and his fellow scalawags reconnoitered their plans for some upcoming Halloween night shenanigans.

Russ was a mischievous boy in nature and never hesitated to employ those playful powers.  He likely inherited those jokester genes from his Grandfather Ingebrit Tollefson who passed them on to Russell’s mother, Marie, and then on to our father, in 1918, when he was born.

Not only was frost on the pumpkins in northern Minnesota that Fall, but it also gave an icy glaze to the toilet seats of many a farmer’s outhouses, too.  Back in those days, indoor plumbing was mainly a luxury of the rich.  The greatest majority of farm families “answered nature’s call” by going out to a tiny building usually located in their perimeter wooded grove of trees that encircled those farms in what was known as a “windbreak”.  Now, whether the genesis of this silliness was handed down from our dad’s parent’s generation, or, they may have conjured up this idea on their own………either way, that night, Russell and his “Crap Cottage Commandos” were about to engage their stealth in hunting, as a pack, for their victim neighbor farmer and his outhouse in the windbreak woods.  Time for the classic PUSH OVER THE OUTHOUSE AND RUN prank!!!

For those too young to remember or know what constituted an outhouse, it was basically a deep pit that was dug into the ground.  A small house was built over the pit with either one toilet seat inside, or two.  With only “chamber pots” inside the common farm house, many families used this outdoor structure to rid themselves of human waste that each of us produce.   Yes, it was very odoriferous and the antithesis of clean, but like old sailors used to say……”Any port in a storm is GOOD”, especially if that storm was brewing inside your lower bowels 😉

Distant timber wolves howled under a black onyx sky as the boys and our young Russell neared an unsuspecting farm yard.  The only illumination to be seen was dimly lit window light as it shown from the farm house that they quietly approached for the “kill”.  Sure enough, target in sight, there was the family outhouse nestled in the speckled shadows of the October moon above them.  With their young adolescent muscles this “bulldozing over” of that outhouse should be a cinch.  Getting a foothold in the darkness on one side of that “crap castle”, the boys began to push against the side wall.  There was some movement of the “poop parlor”, but not quite enough as the “potty perch” rocked back onto its foundation.  With another frenzied mass of muscles from Russ and the boys, the outhouse gave way and “TIMBERRRRR!!”, over it went with a crash.

All of a sudden, sheer pandemonium erupted as the farmer who owned that property came storming out of his house with a double barrel shotgun loaded with rock salt shells (those wouldn’t likely kill ya, but they’d hurt like the dickens if they connected with your behind)!!!!  KABOOOM!!!  That fiery farmer fired off a massive explosion of a shot into the air as fire belched from the muzzle into that frigid night sky.  Russell and his gang went wild and in all directions as they tripped over each other in their pell-mell attempts to escape or be caught by one VERY mad farmer.

In the absolute bedlam of that crazy moment, one of those poor hooligans became completely disoriented in the darkness and, rather than running away from the scene, he actually ran right INTO the “poop pit” that used to be covered by that outhouse!!!  That lil culprit was stuck in human “goo” clear up to his “whatevers” and was screaming at the top of his lungs to be rescued.  Young Russell, and his buddies, however, thought the plight of their fellow “stinker” fit him quite well as they laughed hysterically while they fled from that farmer’s wrath and back into the cloak of darkness.  Something tells me that the poor schmuck in that fecal fallow likely now had a new nickname……..”Brownie Boy”!!!  So surmises this Norwegian Farmer’s Son. 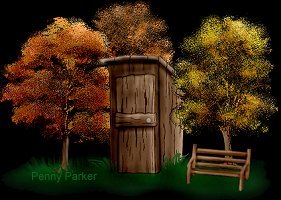