July 25th…“WAS YOUR VERY FIRST CHILDHOOD OVER NIGHT STAY FANTASTIC?  OR A FAILURE?  WHY?”

The rootin’ tootinest, high falootinest, wild n wooliest, rip snortinest that there ever was!!!!  That describes both my Uncle Doren Noorlun AND the electrically-charged explosions in the sky that wreaked havoc in a tender little heart in 1959 when I was five years old.  I was about to experience my very first “overnighter” with uncle and his family.  Up until that point in my very young life, I had never been away from home and my parents.

My uncle was quite the colorful character, I seem to recall that my father’s younger brother owned an auto body shop there in Kiester, at the time, and the Doren Noorlun family lived in a modest home, within the city limits, that sat alongside Highway 22 as one drove north out of our beloved hometown.

Fear is a powerful emotion in our lives.  It can freeze a grown man in his tracks or, within minutes, can turn a happy little five year old into a screaming banshee, hollering for his mommy at the top of his lungs.   In his usual flair of gregarious shenanigans, Uncle Doren and his sweet wife, Bonnie, had been visiting our farm earlier that day and had extended an invitation to come stay the night with them in town.  Excited for sure, but I was also a bit wary of this garrulous guy who could sneak up on me and wrassle me into a headlock with his arm around my neck.  As his wrestling prisoner, he’d then give me a knuckle burn on my scalp for good teasing measure.  Or, that prankster uncle of mine would see when I wasn’t lookin’ and give me a strong finger snap to the skull or shoulder (we called it a schmik).  Yikes, would those hurt!!!

During his service in Europe during World War 2, our outgoing uncle was a motorcycle messenger while in the Army as a member of the 91st Infantry Division.   After the War, that talented guy also learned to fly an airplane.  I was naturally attracted to this uncle who enjoyed living on the “wild side”, so it was a treat when he and our dear Aunt Bonnie invited me to their home in town for my very first “overnighter”.

After arriving at their house, it was all was fun n games as I enjoyed my cousins, Doreen (we called her “Reenie”) and Barb, who were more the age of my elder brother and sister.  As can happen quickly across the flat, Midwest farmlands, a summer thunderstorm had rolled in and morphed that beautiful afternoon into a rumbling monster of blackness that hovered over the top of uncle’s home and began to cast its thunderbolts to the ground in our direction.  With the celestial goings on outside, I was totally out of my comfort zone and realized my safe sanctuary of home was at least three miles away.   I began to whimper as fear built up inside of me with every successive volley of lightning and thunder above us.  Bless her memory, Aunt Bonnie did her best to try to quell this little panicky person, but when the next pyrotechnic dynamite lit up the sky…….it lit ME up, as well.  I lost it as I began howling and shrieking, “I WANNA GO HOME!!!” and “I WANT MY MOMMY!!!” and “PLEASE TAKE ME HOME NOW UNCLE DOREN!!!”

Exhibiting his utter exasperation and having given up on consoling this terror-struck child, Uncle Doren (using very colorful language that is best left to history) hustled my fear-filled frame out into the wild night’s weather and into his car.  Three miles later, we arrived at my farm and I rocketed into the house and my mother’s protective arms.  As my flabbergasted uncle “kicked me to the curb” that night, I recall his grumbled growl as he made it very clear that this was the first AND LAST time I would stay at HIS house ever again.  Such were the trials of a child dwarfed by God’s immeasurable power in His sky.  A humble moment for this Norwegian Farmer’s Son. 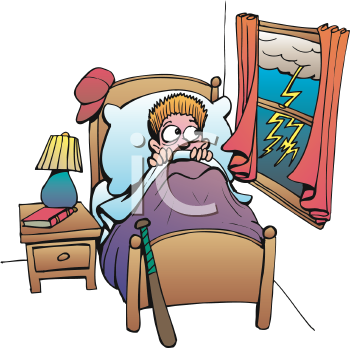