April 19th…“TELL ABOUT ANY SPORTS YOU PLAYED IN JUNIOR HIGH OR HIGH SCHOOL.” 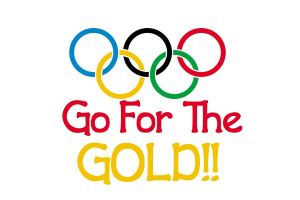 If there were a sporting event for milking a herd of cows with broken ribs, our farmer father would have easily won Gold Medals with ease.  But, having grown up during the Great Depression of the 1930’s, the only “sport” our dad knew was hard work on his boyhood family farm, as a hired hand at other farms and finally running OUR farm.  Therefore, being inculcated in a “work only” life style, Dad had this to say about organized team sports of our day……“I can’t see any SENSE in grown men chasing a little ball around a field all day!!”   So, having grown up under our father’s example, in reference to team sports, I also never possessed the desire to pursue the customary athletics of football, basketball or baseball.  Instead, in order to facilitate some sort of sports experience, I decided to venture into more solo/solitary realms such as Track or Wrestling.  There, I considered I would only be competing against a time clock, record goal or a single or reduced number of competitive opponents.

Alongside the wind-whipped farmlands of southern Minnesota, was our oval, cinder track where I had my first taste of being on a team with our Kiester, Minnesota Junior High Track Team in the 1966 – 67 school year.  Dressed in the dregs of ancient tracksters before us, we green-horned cinder boys would begin our run round the bend of our track and were forced to lean deeply into the blustery prairie winds as we ran the one length of the track.  It was a challenge, to say the least, but once you rounded the bend and the wind caught your back, one became like a hurricane-filled sail on a high speed yacht and, suddenly, this boy could hardly run fast enough to keep from being blown flat to the ground by the invisible wind power behind me!!!

When I joined the Battle Ground High School Track Team in the Spring of 1970, I tried to compete in the High Jump competition.  You’ve heard of “trial and error”?……well, for me, it was more like “error and a joke”!  It seemed I developed a mental block on making it over the top of that High Bar.  The more I practiced, the lower I had to place the bar.  After awhile, I realized that the High Jump was NOT my type of athletic event and moved on to running events.

I was a pretty fair runner, as far as sprinting competitions, so dear Mr. Lawrence, our coach had me run as an “anchor man” in the 440 yard relay.  Our “Tiger” team had a Track & Field Meet in Vancouver, Washington one late Spring afternoon.  What happened next has always brought a smile to my memory.  Keep in mind, that at that time, I had a VERY shiny silver crown over one of my front teeth.  During the relay race, when my teammate handed off the baton to me, I took off on the fly.  I must’ve been running with my mouth wide open, because, as I was sprinting around the last corner of the track, someone from the bleachers yelled out, “GO SILVER TOOTH!!!!”   The sunshine must’ve been sparkling off of my silver crown.  If I wasn’t preoccupied with winning that race, I think I would’ve busted out laughing right on the spot!!! 😉

Wrestling was my other sports choice in both Junior and Senior High School days.  Hard to believe it now (in my “Lardo Larry” stage of life), but I was once a slim n trim, zit-faced 120 pounds back in my school days.  Mr. Daryl Parker was my “Bulldogs” Wrestling Coach in Minnesota days and Mr. Richard Lawrence coached our “Tigers” Wrestling Team.  Both of these great men exuded the best in leadership and were admired by all!

On a late afternoon, the grapplers of our “Tiger” Wrestling Team boarded the school bus for a competition far to our north in the town of Centralia, Washington.  With both schools having the same mascot, it was going to be one “Tiger” against another.  As the referee’s whistle blasted, we two “tigers” came at each other, on that wrestling mat, and “locked on” for civil combat.  I swung around my opponent and threw my arm around his neck, intending to throw him over my hip for the “take down”.   In our sweaty condition though, my arm slipped over his head and now he took the advantage of weight and gravity as he smashed my head down HARD into the mat.  I saw “stars” and almost fainted right there from the pain.  The match then ended quickly with myself being pinned.  Almost immediately, upon returning to our team bench, I started to suffer with amazing head pain and loss of clear vision.  I was escorted to our team’s locker room, but my condition worsened.  Mr. Lawrence transitioned from being our team’s “Commanding General”, to a doting and loving father figure as he carefully ushered me into a waiting car and ran me over to the local hospital in that town.  The hospital confirmed that I was suffering with a classic concussion and that they’d like to keep me, at least overnight, for observation and treatment.  Coach Lawrence thanked them, but shared that the wrestling meet would soon be over and we had to catch our bus home to Battle Ground.   As I’m stretched out in the back seat of that bus, our compassionate coach rode next to me the entire distance home and personally drove me home in his car when we got back to our town.  I was so touched by the tender heart housed within that strong mountain of a man.  He was a person of sincere integrity who cared for others and, even though he suffered a “chewing out” by my dad when we got home (for allowing the injury to happen), I will always regard the Honorable Mr. Richard Lawrence as one of my young life heroes.

So goes the limited sports experiences of this Norwegian Farmer’s Son.