January 12th…”WHAT DID YOUR FATHER DO FOR A LIVING?”

As his father before him, my father was a tiller of the soil and counted among other great All American Farmers.  Due to the hard times of growing up in The Great Depression of the 1930’s, Russ managed to survive in his childhood era of northern Minnesota.  Our father only finished his 8th Grade year of education in the public school system.  He then left home to begin his new chapter of life as a hired farm hand to various farms in his home area.  It must have been a real adventure for a 14 year old boy to be working at various farms in and near Mahnomen, Minnesota.  Dad was grateful to get even the simple wages of a place to sleep and a meal for his tummy (with a few dollars in his pocket) in exchange for long days in the farmer’s fields.

Dad spoke of harvesting potatoes from sunrise to sunset and getting only 50 cents for the entire day of grueling, bent over labor.  After his teenage years of being a farm hired hand, our family patriarch headed for south central Minnesota and northern Iowa to seek agricultural employment on the farms in those areas.

While there, in northern Iowa, Russell caught the eye of another Norwegian of the gentle persuasion……that of our dear mother, Clarice Arlone Sletten.    They were married in June of 1941 and the newlyweds went to work for a couple bachelor brother farmers near Mom’s tiny village of Scarville, Iowa. 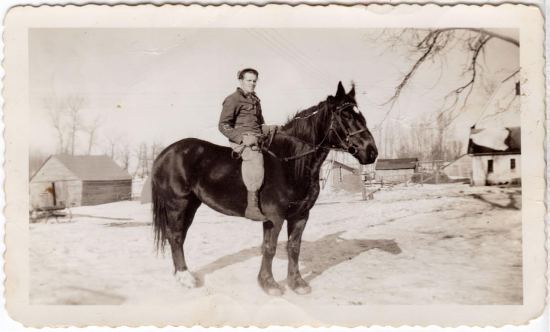 In the Spring of 1942, our daddy was looking for new opportunities of agricultural employment in the Kiester, Minnesota area.  It was in that dear village that Father met a sweet man by the name of Walter (lovingly known by all as Wally) Mutschler.  Wally and his darling wife, Genevieve, not only hired on Russell and Clarice to help them work their farm, but also became like an extra set of parents for my folks and an “extra set” of grandparents for us Noorlun kids.  We’ve been tied in love to the Mutschler family ever since!!

The Spring of 1946 brought a wonderful opportunity for Dad and Mom to have a farm of their very own.  Just to the south of the Mutschler farm (where they were hired hands), was a lovely 120 acres owned by Morten and Tina Holstad.  Tina’s parents (or grandparents) were early farm folk of that land back in the late 1800’s.  Seem to recall a family by the name of Thompson were the original homesteaders farther back in the 1800’s.  When our folks moved onto the “Holstad place”, they rented from Morten and Tina, but eventually, they signed papers to begin the process of purchasing this special farm to have and call their very own.

Life on a farm is both heavenly and hard at the same time.  To smell the delicious black earth turned over by the plow is a delight to the senses and then, at the end of the growing season, to catch the heady fragrance of harvested corn stored in the corncrib makes one glad just to be alive.

Thanks to our father and mother’s choice of livelihood, I was able to see the full gamut of life’s spectrum from piglets and kittens being born to the necessary end of life with the butchering of animals to provide meat to the freezer for our family meals.  I loved it all and was touched profoundly for my entire life by each farm experience.  Thanks, Dad, I’m so glad I grew up as a Norwegian Farmer’s Son!!! :o)