January 4th…”WHAT WAS DAILY LIFE LIKE FOR YOUR FARM ANIMALS IN THE WINTER?” 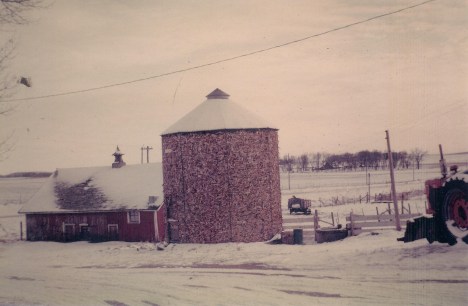 Permeating every nuance of life, for both our family and livestock, was the piercing bitterness of winter’s sting.  Like innumerable farmers before them, my parents spent a good share of their energy and resources during the spring, summer and fall season to prepare for the caring and feeding of our animal “family” during the bitter cold of winter months. 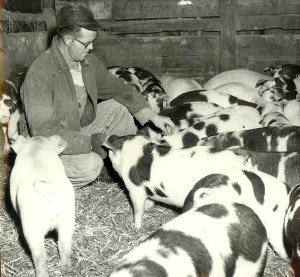 Ears of dried field corn from our cylindrical, wire-walled corn crib were ground into feed for our hogs and their piglets.  As Old Man Winter whipped his winds around their hog house “heaven”, futilely looking for a way inside, these porcine parents, grunting placidly, were fed by my father, Russell C. Noorlun, while happily rutting in their straw bedding.  Baby piglets, with their exuberant energy, gaily played under the cozy warmth of the large heat lamps that held the sub-zero temperatures outside these walls at bay.

Even our sheep had the benefit of a warm sounding name to combat the winter chill…..her name was “Cheetah”, just like the fast feline that races across the hot plains of Africa.  Our cousin, Ron Sletten, would take a large, glass “7Up” soda bottle and fill it with milk from one of our cows.  Then, he’d pull a rubber nipple over the top and climb into “Cheetah’s” pen.  What a happy task he enjoyed as our little woolly wonder voraciously vacuumed out those tasty delights till that bottle was dry.

Something that I felt was magical happened to our barn every winter.  The bounteous blessings of bovine body heat resulted in a much higher moisture content inside those animalized walls.  That very comfortable animal heat source caused the barn siding to actually swell up and seal the barn and its precious source of “live” heat.  Each chilly day, when I pulled open the “Dutch doors”(split top and bottom) of that red-painted animal refuge, I felt the wonderful, welcoming warmth that often rivaled that of our own home that stood at a distance across the yard.

Towering above our barn was our silo that held green, ground-up corn that we called “silage”.  During the growing season, our father used special machinery to cut, chop and blow that silage up into the very tall silo to be used during the frigid winter months for feeding our livestock.

During those frozen, wild winters, it was one of my chores to climb up the tunnel-enclosed ladder to the top of the silo in order to begin tossing down silage for the morning or evening feedings of our dairy herd.  There was always a thick crust of frozen silage that required me to use a pick-ax to break through it to the softer silage beneath.  Now that the silage was busted loose from its frozen strata, I’d use a wide-tined silage fork to scoop up and throw it down the tunnel chute.  A challenge to me, in this task, was a back-draft blast of air that would come shooting up the ladder tunnel from the barn below.  After a blast or two of silage in the face from that draft, I learned to stand off to the side of the chute door when I tossed down the silage, for (as I found out the hard way) at least 40% of the silage blew itself right back into the silo from whence it was thrown.

A fun phenomena of winter life in the barn was our daddy’s daily feeding of our colossal clowder of cats.  The source of that feeding was our Holstein cows that were milked twice a day.  The device used to do that milking was sometimes known as a “belly milker” that consisted of a large strap that went around the cow’s midsection and from that strap hung the vacuum-powered milker.  Every kitty cat knew that the place to park itself was close to a very large, white porcelain-coated metal feeding bowl that was in the alleyway of our barn.  Faithfully, during every milking time, Dad would take one of his freshly-filled milkers from a cow and then call out, “HERE KITTY, KITTY, KITTY!!!”  Cats flew towards Dad from every nook and cranny of that barn in a wild dash to be the first ones around that big milk bowl for their “breakfast” or “supper”. 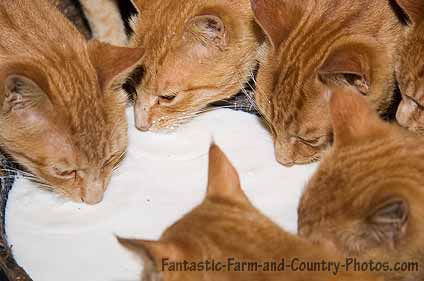 As Dad began to pour that warm milk into the large bowl, other late comer cats began to climb over the top of other cats around the rim of the bowl.  Many a kitty got their heads doused with milk.  That didn’t seem to bother them one bit, though, because they just continued to lap up the luxurious white liquid while neighboring felines would merely lick off the milky head of the cat next to them.  My parents loved their animals, and so did this Norwegian Farmer’s Son.