December 6th…“WHAT ARE SOME THINGS THAT IMPRESSED YOU ABOUT YOUR FARMER FATHER AND THAT YOU WANTED TO EMULATE?”

From the first moments, in 1954, when he gazed over the railings of my baby crib, my father, Russell Conrad Noorlun, has always been my hero.  And, as anyone who adulates a hero, you wanna act like your hero and even dress like your hero.  I fawned over the handsome way Dad combed his hair.  I even gushed in praise over the “Old Spice” cologne our patriarch would splash on whenever we went on a family outing or to church.  But, one of the things that caught my eye, on a daily basis, were the handsome bib overalls that our daddy wore to protect his other clothing while engaged in the arduous career of farming.  Anyone in agriculture is acutely aware of how rugged that lifestyle can be.  Therefore, bib overalls performed exactly as they were named.  They were “over all” your other regular clothes.  These clothing items were made of an extra heavy type of material that consisted of over-sized pants that could be pulled on over a regular pair of jeans or work trousers.  There was a flap (also known as the “bib”) that was attached to the front of the lower pants.  A double-strapped pair of suspenders were attached to the lower pants in the back.  The “bib” was brought up to the front of the shirt you were wearing, then the suspenders were brought up over the shoulders, from the back, to click onto and secure the bib to your chest.  I share all these descriptions because very few of my young readers have been exposed to farm life and this essential piece of a farmer’s protective clothing.

What mesmerized this little farm boy, was the almost uncountable number of pockets in Dad’s bibs!  Big pockets, small pockets, snap pockets, even looped pockets.  Since our farmer father enjoyed smoking both cigarettes and pipe, he even had pockets for his flat can of “Prince Albert” pipe tobacco and a pocket for the “onion skin” thin cigarette papers that he’d use to roll his own cigarettes.  And, in order to light up those tobacco goodies, Dad had a pocket for matches, or fluid lighter, as well.  Of course there was a pocket for his smoking pipe to ride along with him, too.  Dad carried a writing implement called a “bullet pencil”.  It consisted of a metal tip on each end to protect the pencil from being broken during hard labor.  There was a skinny pocket for that, too.

Here’s my poem to kinda sum up this special clothing item.

They must’ve held, A hundred tools.

A pocket or loop, For every task,

A pocket in the bib, Up near his shirt,

Held a flat can, Of “Prince Albert”,

So he could pack, And fill his pipe,

To smoke tobacco, When the time was ripe. 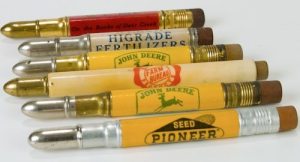 And next to that, Where he could pull it,

There was a pocket, For a pencil bullet.

Down on his leg, Above his knee,

Were a slot n loop, For pliers, ya see.

Now the fabric for, These bib overalls,

Had to be tough, For cleaning cow stalls,

Or kneeling down, To fix our tractors,

While swattin’ flies, Them lil’ distractors.

This little farmer, Done put in my dibs,