May 10th…“WHO WAS YOUR FAVORITE SINGING GROUP OR BAND WHEN YOU WERE A YOUNGSTER ON THE FARM?

I could only speak “Minnesotan” at the tender age of 10 years old in 1964.  And even THAT was a challenge sometimes when I got twitterpated in front of a girl classmate that I had a crush on.  Living there on our farm, surrounded by other Norwegian, German and similar Nordic families, we pretty much rendered language in the everyday American way.   Then came……….. “The Beatles”!!

Now we all know that music can make magic happen, and at the impressionable age of 10, I was “captured” by the mystique of the “British Invasion” of these strange speaking Liverpudlians who were the Rock n Roll band called, “The Beatles”.    I’m sure part of the intrigue came from their British accents that flavored their English words in a way I’d never heard before.  Then, another magnetic pull, was their fast, funny and quick-witted ways of speaking to their audience and especially the way they “handled” reporters who were always prying into their lives with cameras and questions.

The American music scene was in a major paradigm shift from the “doowop” of the 1950’s that morphed into the folk singer times of the early 1960’s.   And, although
“The Beatles” had their influences from American music of the times mentioned, they brought an entire new sound into the ears and hearts of teenagers world wide…….almost overnight.

All the radio stations in southern Minnesota were heralding the exciting news that this new and sensational rock band was going to perform for the first time on American soil on the very popular television variety show called, “The Ed Sullivan Show”.   (I’ve alluded to this story earlier in my blog, but share it here again.)  I just HAD to see The Fab Four with my own two eyes, as well as hear more of their tremendous new songs that permeated the airwaves of the nation.

Our dear Mom and Dad were from the generation of Swing and Big Band music, so there was no way they were going to have any intention of watching some shaggy-headed gaggle of guys jumping around a stage in front of thousands of screaming fans.  With that stark fact in mind, how in the world would I make my dream come true to see these new famous musicians??? That night was to be their performance and I had only minutes to make something happen.   “Ahaaaaa!”, thought I!!  “I’ll just sneak upstairs into big sister Rosemary’s bedroom and watch those British Boy Wonders on that new little black & white portable television her fiance had bought for her.” 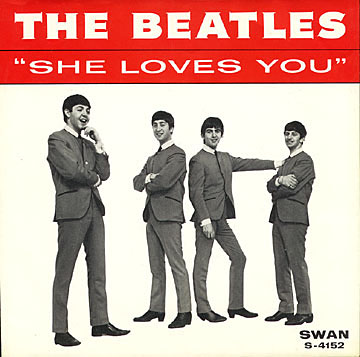 I slithered up those stairs like a spy in a movie and, with a gentle turn of the knob on the front of Rosie’s TV, I heard it click “on” and the picture tube came crackling to life in front of my eyes.  YES!, there was old Ed Sullivan himself just ending his introduction as he threw his arms in their direction and proclaimed……..“Here they are, THE BEATLES!!”  Of course, the entire audience of mainly young ladies erupted in screams of unbridled delight as their British “boyfriends” launched into “She Loves You!”   Little did I realize, that my rock n roll joy was to only last for a couple minutes, at best.

My Beatles bliss was shattered by something called a vent grate in the floor of sister’s bedroom that basically covered an opening in the floor and down to the Living Room below us.  Old homes, in those days, made use of heat rising and had venting grates that would allow that heat to rise to the upstairs bedrooms and heat those areas, as well.   In MY case, the sound of the loud, “SHE LOVES YOU, YEAH, YEAH, YEAH!!!!” filtered right downstairs to Rosemary’s horrified ears.  How DARE her little brother even TOUCH her precious television set; say nothing about using it without her permission!!  Next thing I heard was the stairway door being ripped off its hinges as my furious sister launched herself up those stairs, like a storm trooper to blow me out of my Beatles Bunker!!   I received one SERIOUS tongue lashing for having invaded HER domain and HER television.  With a vicious twist of her wrist on the power knob………OFF went the TV and “The Beatles”.  I was one vanquished little fan……..and in trouble, too!

Later that same year, “The Beatles” made their first movie called, “A Hard Day’s Night”.  I saw that, and their other movies, too, and enjoyed them all.  Even after “The Beatles” disbanded, I still found myself returning to and enjoying the musical genius of those great young artists.  Makes ya wonder if they wrote “Norwegian Wood” for this Norwegian Farmer’s Son. 😉 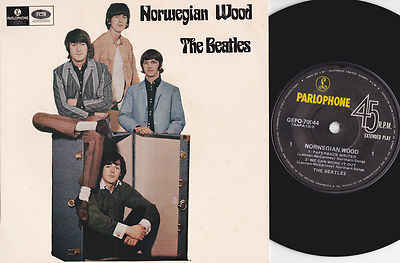