February 19th…“WHAT DO YOU REMEMBER AS YOUR FAVORITE SUBJECT IN HIGH SCHOOL?”

From the time I was a toddler listening to my mother sing hymns in church, I have always had a love for music and singing.   As I matured through my young years, I became especially impressed with the power and majestic expression of the human voice through excellent choral music.  As I settled into my new life in southwest Washington State, I entered my High School years there at Battle Ground High School in Battle Ground, Washington.  I was keen to observe their wonderful choral department and paid attention to the man who directed them so well.

Mr. Orrell Peru had an aura about him that quietly commanded respect and allegiance.  Like a magnet, he drew me to his persona and integrity.  In my Freshman year, I could not muster the courage to attempt an audition to try to be a part of Mr. Peru’s fine choral department.  Instead, as a member of the audience, I would look forward to observing how he led his choir performances.   He conducted these young voices with a regal, yet humble manner that you could tell was reciprocated by the young members of his entourage.   As a choir, they sensed his loving authority and responded to his direction in an obedient joy of song. 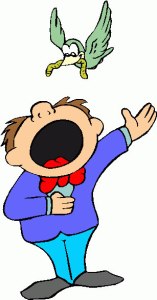 When I finally gained the courage to ask for an audition from this great musical educator, I wanted to impress him.  In my dreams, I envisioned myself as a low-voiced bass singer, so, as he had me do singing scales next to his piano, I tried to make my voice sound basso profundis magnifico……(translated: deep and low magnificence).  In his gentle and honest kindness, Mr. Peru accepted me into his Concert Choir, but gave me some very sage advice, “Elliott, you need to face the fact that you’ll never be a bass singer(lowest range), not even a baritone(the next range up from a low bass).  YOU, young man, are a First Tenor.  Be proud of that fact and be happy with the voice God gave you.  Let your voice be naturally bright and bring the clarity of each note you sing to be enunciated right up front by your teeth.”

To inspire me as a tenor, Mr. Peru encouraged me to listen to and study the singing style of the famous tenor, Mario Lanza (who lived between 1921 till 1959).   I bought many of Lanza’s records and saw many of his movies.  I not only was inspired by Mr. Lanza’s singing, but was captured by the zest for life that this young man had.

Easily, the highlight of my years with the Battle Ground High School Concert Choir was when we staged the Broadway musical, “Camelot”.  It was a lot of hard work and practice, but what sweet memories transpired as we all stepped back into time and fantasy as we told the story, through song, of King Arthur, Queen Guinevere, Prince Lancelot and others.  What a marvelous time of song it was for this stage of life for a Norwegian Farmer’s Son.