February 3rd…“SHARE A MEMORY ABOUT A WEATHER-RELATED SCHOOL CANCELLATION”.

The year 1964 saw the completion of my first decade of life on Planet Earth.  Wow, a whole TEN YEARS old already!  With that milestone tucked neatly under my belt, I perused the daily calendar as it continued to pass from that of a classic Winter’s scene to the mild, marvelous month of March that had again descended upon the plains of southern Minnesota and my hometown village of Kiester.  Spring seemed to have regained sway over the ravages of Winter’s iron grip.  Now, as each day got a bit warmer, we found ourselves playing outdoors with only T-shirts instead of multiple layers of long-johns and insulated clothing that were a necessity during the previous season.  One could now catch the fragrance in the air of delicious green grass as our lawn was being mowed and our rich farm soils drying in the welcoming rays of sweet sunshine.

One of my buddies, in those days, was John Steven.  It was soon to be his birthday and John had invited me to his farm home located a few miles east of our sweet hometown.  Excitement swelled within me, for it was not JUST a birthday party, but was to be an “over-nighter”, too, with his very kind family.   “OH BOY!  What fun! This will be a kick!” , I thought to myself.

The school bell set us free from education’s grasp as John and I ran to catch his bus for the over-nighter birthday party at his farm.  Upon arrival at the end of his long driveway, we jumped down from the last bus step as we boogied down the graveled lane towards their farmyard.   The two of us burst into his quaint two story farmhouse and raced upstairs to get my gear settled into his bedroom where we were gonna bunk together for the night.  To pass the time till Supper, John’s older brother, Wayne, invited us outside to enjoy the Springtime evening and shoot some basketball against the hoop that was attached to the side of their barn or granary.  Of course, there were no “court” markings, so to speak, we just bounced the old basketball the best we could on the dirt and scrub grass that grew there in their farmyard.  I remember looking around their farm while smelling the delicious aroma of this new warm season that was emerging around us and musing,   “Ahhhhh, Spring is finally here and it’s GREAT!”  Little did I know, at that moment, what was in store for myself and the dear Steven Family that were my hosts that evening.

The Spring evening faded into night and we eventually came inside for the family’s supper, John’s birthday celebration and then some television watching alongside this gentle clan of farmers.  After offering “thanks for the meal” and “good night” to his folks, we boys clamored up the squeaky stairs to our “eagle’s nest” of a bedroom and jabbered our little 4th Grade heads off as we prepared to sleep double in John’s bed.  Some hours after drifting off to sleep, John jostled me awake.  We both realized there was now a significant frigidity in the air and the newly acquired goose pimples all over our bodies proved that something very strange was occurring.  Our eyes opened wide in amazement as we became cognizant of the sounds of blasting blizzard winds that were scouring John’s bedroom window with its snowy ice crystals.  SNOW???  AT THE END OF MARCH???

Wide awake now, we amazed little boys were shivering with chattering teeth as we tippy-toed across the icy feel of the linoleum floor and tried to peer out into the black of the night via John’s frosted bedroom window.  Our intentions were to get a glance of what in the world had happened to the Spring we enjoyed just hours ago!  Unable to discern anything that was in the darkness beyond the glass, we quickly scrounged up a number of heavy quilts for John’s bed and then vamoosed our little goose-pimpled butts back into the bed to stay warm with each other’s body heat and the blessings of those heavy quilts that now guarded us against the frozen wildness of the night outside.

When our eyes popped open the next morning, we could see our breath vapors in the air of John’s bedroom.  Even with morning daylight, nothing could be seen outside of his bedroom windows, though, cause they had been completely frosted over from the blizzard still in full blow outside.  Having only taken “Spring-type” clothes along for what was to have been only an overnight stay, John then began sharing his collection of Winter clothes with me.  For his age, John was much taller than I was, so everything I wore was kinda floppin’ and moppin’ up the floor as I moved about, but hey, I was WARM and that’s what counted.  As our energetic young bodies bounded down the stairs, we came into and were immediately enveloped by the cozy warmth of the Steven’s kitchen.  With a smile on her lips, John’s mother gave us the joyous news that was music to our juvenile ears……she said, “SCHOOL IS CLOSED DUE TO BLIZZARD CONDITIONS!”   The news had been broadcast over one of the local radio stations.  Within a blink, our eyes lit up as we looked at each other, then we burst forth with exclamations of “WAHOOOO!!!”  Since the phone lines of our county were still intact, Mrs. Stevens had given my mother a call to let her know that all was well and that I’d be a Steven’s kid for awhile and well looked after.

John’s mother was an excellent cook!  For breakfast, on that first blizzard morning, she made us the BIGGEST pancakes I had ever seen in my 10 year old life.  A single pancake completely covered my large plate.  That doughy delight must have been ten inches across, at least!  We slathered those monster cakes with real sweet cream butter made at our local creamery in town.  Then came the “gallons” of rich maple syrup that had just the right viscosity to make a slow motion ooozing over the pancake pile and slowly dribble to the plate below.  An utter delight to the taste buds they were.  To top off this early morning food celebration came a breakfast dessert of fresh strawberries sliced into rich cream.  Scrumptious, for sure! 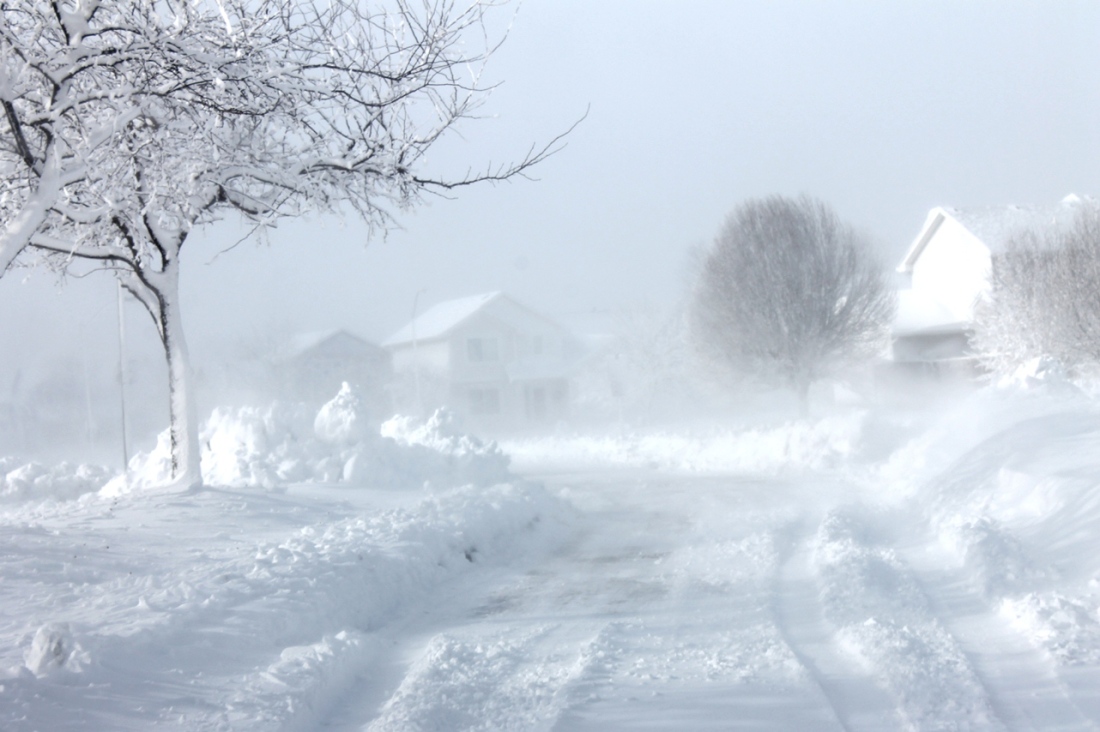 Our little boy engines began to purr for adventure, now that our “gas tanks” were fueled with that marvelous breakfast.  With both of us wrapped and bundled to the hilt, we ventured forth into the howling white world of snow that had superseded the warmth of Spring that existed just the day before.  Stepping out their front door, wind gusts shrieked past us at such a high velocity, that they literally sucked the air from our lungs, causing us to gasp quickly to return oxygen to our bodies.  Even now, in daylight, with the blizzard’s roar around us, it was difficult to see neighboring farms, due to the visibility being cut down by the snow storm rolling through the area.  Accumulations made snow drifts much taller than our 10 year old bodies, and those massive snow drifts now inhabited what, the day before, had been green grass and pasturing cows.  Yet, even in the fierceness of this scene, the beauty of God showed His creativity within His storm by sculpting snow drifts of all shapes and sizes.  Trudging our snow-laden legs through this mass of screaming white, we came upon artistic dimensions in the snowdrifts that fueled our imaginations.   Thanks to the force of the winds, some of those drifts now had overhanging “cliffs” of snow that allowed us to hunker down underneath them to get away from the stinging winds and more calmly witness this white spectacle from the protection of our temporary “white cave” while the white wonderment swirled around us in wild abandon.

Looking like two human snowballs, John and I came waddling back into his home to thaw our frozen frames.  Peeling off our multiple layers of clothing, we then settled down in front of their living room furnace and began to watch his family’s black & white screened television set.

John’s dear mother made us a giant bowl of steaming hot popcorn to enjoy as we whiled away the hours watching old adventure serials from the 1930’s and 1940’s.  Shows like “Flash Gordon”, “The Adventures Of Crash Corrigan” and others that kept us spellbound and “left in the lurch” at the end of each “chapter” where the hero was about to be killed.  But, as we continued watching the next chapter of the serial, the hero would somehow wiggle out of his dilemma to gain victory over the bad guys.

After three or four days of fun and no school, the wild Winter weather finally abated  and our Faribault County snowplows were once again opening the roads for school buses to travel.  Alas, the adventure had to come to an end and life returned to normal as we boarded the bus from John’s farm back to school and the rigors of reading , writing and arithmetic for this Norwegian Farmer’s Son. 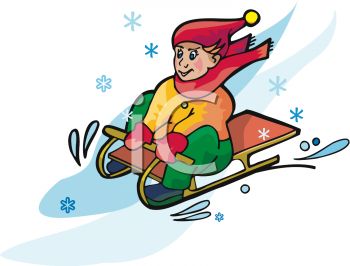