January 19th...”SHARE A STORY ABOUT ONE OF YOUR UNCLES”. 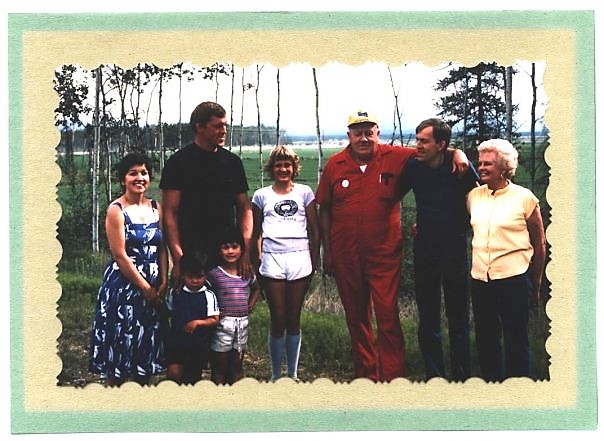 His red jump suit truly fit the flamboyant personality of this man who was larger than life in my young eyes.  Uncle Byron J. “Barney” Hollembaek married our father’s sister Ileen.   Not only was Barney a big, brawny mountain of a man, but he always impressed me with his self-confidence levels that appeared to empower him to take on the world and conquer all that life threw at him.

After serving as a Marine in the South Pacific during World War II, Barney and his bride made their home in the town of Palmer, Alaska.  Eventually, our uncle started a business in that town that sold farm supply products.  When the need arose to resupply his farm store, or pickup big machinery down in the “Lower 48”, Barney would sometimes drop by our farm on his way to buy tractors, harvesting combines or livestock.

After our family had moved to Washington State, Barney came to visit us in Battle Ground, Washington while on a business trip in March of 1972.  His son, Scott, had left his hotrod 1969 Mustang in our garage while on a construction job in Hawaii.  Instead of flying back to Alaska, Barney was going to drive Scott’s car back up to Alaska via the Alaskan/Canadian Highway (also known as the Al/Can).  Uncle asked me if I’d like to go with him on the journey to keep him company.  “YOU BET!!” , I said happily.  I was already on Spring Break from school, so everything was set.  We pointed that muscle-bound Mustang northward and on to adventure.  Having never been to either Canada or Alaska, I was thrilled to be able to experience this fun time!

Two events (among many) were happily seared into my memory while enjoying these moments with Uncle Barney and family.  The first, once we arrived in Palmer,  was to ride my very first snowmobile with my Cousin Erik.  The snow was powder perfect and it was a majestic full moon above us as we flew over their very large farm fields with throttles wide open.  It was really spellbinding in that the moon’s reflection off of that large expanse of snow made the nighttime world around us seem almost as bright as day.   On another night, the second major event I enjoyed was the spectacular “Northern Lights” (Aurora Borealis) in the Alaskan sky above us.  I was captured in absolute awe of this colored magnificence in the frigid skies above.  Wave after undulating wave of greenish blue hues pulsated as if their light show was a symphony to the angels above.  Entranced, I was.  Later on in life, I found out that these effects in the sky are generated by electrical impulses in the ionized air of the atmosphere.  “Borealis” was the Greek god of the north winds and these luminous lights sure seemed to dance upon that wind of his.   Thank you, Uncle Barney, for being a happy part of the life of this Norwegian Farmer’s Son.