January 15th…“WHAT IMPRESSED YOU ABOUT YOUR FATHER’S ABILITY TO INVENT SOLUTIONS TO PROBLEMS ON THE FARM?” 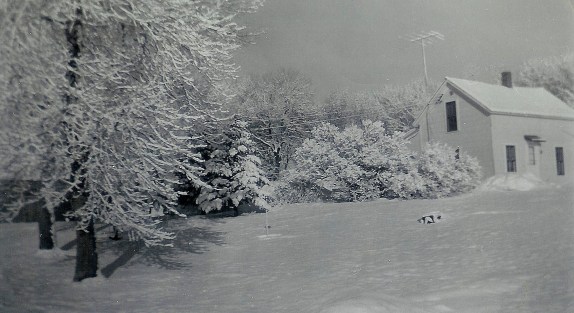 Like a recalcitrant child unwilling to share a toy, so also was Old Man Winter in 1965 in southern Minnesota.  Instead of acquiescing to the release of his power over us, Old Man Winter had a trick up his sleeve.  The marvelous month of March had moved into our lives and hopes of Spring were just around the corner.  There were even signs of brown dirt beginning to peek out from beneath melting piles of snow that had been around since the Fall of 1964.  One night though, what began as simple rain storm, was quickly overtaken by a fast moving cold front that dropped temperatures well below freezing in a blink of time and , in the transition of going from rain to ice, the moisture-laden electricity power poles and lines were now heavily coated with thick, frozen crustaceans.  All it took was one more blast of powerful winds and those massive power poles snapped like matchsticks for miles.  We, and everyone around us, went from modern life to pioneer existence literally overnight.

Before the blizzard knocked out our electricity source, our father had electric motors that provided vacuum for him to run two “belly milkers” to milk our cows twice a day.  Our dairy herd consisted of 15 Holstein cows that are world famous for their impressive quantity of fine milk that they produce.  Our dear Dad, in this frozen predicament of being without electrical power, could no longer use his two vacuum-powered milking machines.  Now, in order to get that job done, twice a day, he had to resort to the old fashioned way of milking our herd………..BY HAND SQUEEZING THE MILK OUT OF EACH COW’S UDDER (MILK) BAG.

Keep in mind now, that every cow has four teats on her udder (milk bag) that had to be squeezed multiple times to extract up to four gallons of milk per cow.  And, the cows had to be milked morning AND evening.  Four teats times fifteen cows equals 60 teats squeezed till she was “dry” and then multiply that by two (morning and evening).  Incredibly, that comes out to 120 teats a day that had to be squeezed and pulled till no more milk would come out into the bucket.  Poor father, there he was squatting on his milk stool in that barn, in the severe cold of a late Winter blizzard.  Well, after two or three days of that “torture”, his hands were beginning to cramp severely  and I’m sure his back was killing him in pain from bending over that milk bucket 15 times……..twice a day.

To the rescue came Dad’s inventive genius in the form of a tractor.  “A tractor to milk cows?”, you say?  Here’s what he did.  Now I know nothing about engines and mechanics, but our Norwegian Farmer father did.  The trustworthy Farmall H tractor was backed up to the barn door.  After some mechanical thinking, Dad was able to connect vacuum hoses from the milking system in the barn and somehow plug them into the running engine of the tractor.  He would then run the engine up to high speed so that a higher degree of vacuum would be produced to at least run one of his “belly milkers”.

So while Old Man Winter clawed at his last gasp of frozen expression outside our barn walls, I stood in awe at an amazing feat of problem solving that made me really proud to be known as his Norwegian Farmer’s Son.